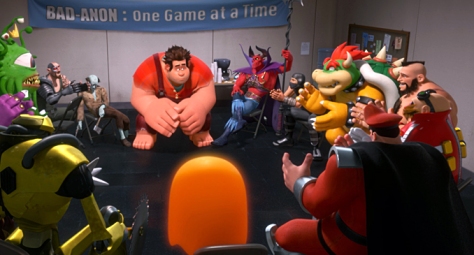 While cinema has mastered the adaptation of novels, theatre and comic books, among many other mediums, the thriving video game industry remains unconquered. Cinema’s leading studios have tried on several occasions, but even the better video game adaptations – Silent Hill, Hitman and Tomb Raider – left a large proportion of audiences disappointed. As their rival studios continue to fail, Disney step in to the still emerging subgenre with their original, video game influenced animation Wreck-It Ralph.

The narrative is based on an innovative concept where Toy Story meets Who Framed Roger Rabbit which focuses on a central question: what do the beloved video game characters do when the gamers stop playing the games?

Ralph, voiced by John C Reilly, is the titled antagonist of a video game Wreck-It Ralph, who has grown tired of being treated as nothing more than the bad guy. In order to change his reputation he ventures into the multi-dimensional video game universe to achieve hero status. However, after his careless actions put the whole arcade and its inhabitants in jeopardy, he must team up with several other characters including a glitch, Vanellope Von Schweetz, voiced by Sarah Silverman, to save it and earn the credit he craves.

The diverse world of video games twinned with the creative freedom of animation proves a winning combination that opens the door to limitless artistic opportunities for the filmmakers. Each individual takes their opportunity and provides clever narrative twists, varying visual styles and a sublime hybridisation of genres.

As Ralph travels through the fictional world, from a gritty dystopian first person shooter to a candy-coated racing game, within an arcade’s interlinked mainframe, genres, narrative conventions and visuals switch in an instant while always remaining coherent. The result is a tremendous animation that like the medium it borrows from is engaging, immersive and visually stunning.

The key factor that sets Wreck-It Ralph apart from previous video game films is that it is clearly made by filmmakers who understand and enjoy the medium they are borrowing from. The film is a celebration of video games and the narrative, though on the surface is formulaic, is brimming with smart references, pleasing cameos and glorious 8-bit visuals that is sure to appeal to die-hard video game fans.

As a piece of video game cinema, Wreck-It Ralph is the best of its kind. Not only does it provide entertainment for fans, but it’s also a vibrant, heartfelt and engaging piece of animation that seamlessly blends adult jokes harmlessly into a children’s narrative and should appeal to a universal audience. Unfortunately, because it remains so closely anchored to video games, it’s hard to imagine those who don’t like them will enjoy this quite as much as I did.