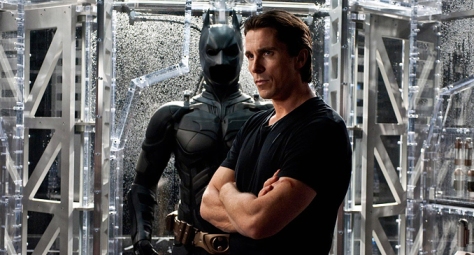 You spat in the faces of Gotham’s worse criminals. Didn’t you think there might be some casualties? Things were always going to get worse before they got better.

When coming into the Batman franchise Christopher Nolan set out to take a unique approach. From the secret funding for military weapons to the science behind the surreal elements, the British filmmaker’s interpretation has remained firmly grounded in realism. While each film before it hurried past the subject, the standout element of Nolan’s trilogy is that his films focus on Bruce Wayne, and with Bale they found an ideal balance for the character.

The trilogy has been centred on presenting the man beneath the cowl, who as it is revealed and in true Nolan fashion, is wearing another mask underneath. As Bruce Wayne he parades the streets of Gotham dressing in flashy suits, driving fast cars and dating fine women, creating an emphasised playboy personality to deter speculation. Within Nolan’s universe, Wayne uses this less psychotic Patrick Bateman persona in the same way as his cowl – to protect those closest to him.

The Dark Knight Rises begins several years after the events of the previous film where the days of simply protecting Gotham from its criminal underbelly are over. Consumed in depression after failing to protect his childhood love, emotionally destroyed by the world crumbling beneath him and with the physical demands finally catching up with him, Batman and Wayne are suffering a loss of identity and is no longer the hero of Gotham. He must rebuild himself, and restore his former glory – essentially the hero must rise.

Christopher Nolan is well renowned for his ability to balance different narratives and various characters. Even on the third film he is able to introduce new characters, esteemed acting personalities and complex plot developments, slotting them into the narrative with ease. He continues in rich form, every new character is relevant and their individual sub-narratives supplement the main storyline, until finally converging in a breathtaking conclusion.

In the build up to the film, expectation for the new cast members surrounded Tom Hardy the most. Despite being restricted by headgear he explodes into the trilogy and through unique voice acting, fantastic dialogue and sheer muscular form he is able to provide a truly memorable performance.

Continuingly, but somewhat expectedly remarkable performances from the growing ensemble cast make for a really enjoyable narrative. The film however is not without its failings. The pacing is way off and many scenes are disjointed and regrettably rather laborious, particularly in the opening third. Wally Pfister’s cinematography is for the most part beautiful but plagued by too many establishing shots of New York. Similarly Hans Zimmer’s soundtrack is underwhelming, failing to reach the narrative-driving intensity of Nolan’s previous films.

The biggest problem of all came is its marketing campaign. Undoubtedly Warner Bros. wanted to generate as much excitement for the film in order to see their conclusion of the illustrious trilogy reach similar return as Avengers Assemble earlier in the year. Leaked set photos and amateur footage, sneak previews, spoiler filled trailers and cast announcements – such an overt marketing campaign, that was especially unnecessary considering the film was bound to have a large audience regardless, somewhat ruined the experience. Given the nature of the director a twist ending was to be expected, but when they have announced Joseph Gordon Levitt and Marion Cotillard as cast members, it would be very surprising if they would remain minor characters.

Unfortunately due to fears of copycats in the US following the terrible events in Denver, and the beautiful sunshine in the UK, it would be very surprising if The Dark Knight Rises brought in new audiences and received anything close to Marvel’s masterpiece.

All of this aside, Nolan’s films are exceptional cinematic events and this is no different. Sure there are flaws, and undoubtedly even one of the finest directors can have his regrets, I’m sure even Van Gogh had regrets for some brushstrokes, but these flaws are vastly outweighed by the masterpiece of the overall picture. Nolan’s trilogy is concluded brilliantly and there has never been a better adaptation of the Batman story. If the plans for another series reboot are true, well – good luck.