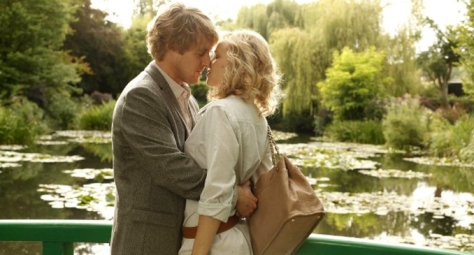 To Paris, with love.

Whether it’s the locations that emulate the beauty of Monet’s paintings or the carefree lifestyle of the Parisians, the French capital receives a similarly romantic treatment as the esteemed filmmaker’s beloved New York. Much like his previous films the emotions towards his setting provide anchorage to the romance present within the narrative; the characters love each other as much as they love the city.

Gil’s (Owen Wilson) love for twenties Paris is established early on in the piece, but those around him dismiss his nostalgia claiming it as denial of a painful present; a golden-age thinking where a different time period is better than the one we live in. Presented in a golden glow and supported by an energetic soundtrack, Allen presents a romantic imagination of Paris where his hero is allowed to meet his artistic influences, such as Hemmingway, Fitzgerald and Eliot, and gain help with his novel. But above all else Gil’s escapism educates him and allows him to connect better in the present, where he once struggled socially.

Wilson’s lead performance is constructed in Allen’s image, his self-obsessed, misanthropic and often cynical protagonists have been portrayed by a variety of actors, and like those before him, it could very well be Allen himself wandering the Parisian cobbles. The film harks back to Allen’s previous work and one scene in particular replicates a scene from Annie Hall (1977). Much like when Alvy Singer is taking Annie to the cinema where an incredibly pretentious man behind discusses the film, for Midnight in Paris a friend of Gil’s fiancée, Paul (Michael Sheen) tediously recounts French history during an imposed guided tour. Though Gil treats this situation with similar objection, the scene lacks Allen’s timeless piece to camera.

It wouldn’t be an Allen film without comedy and befitting of his style the jokes are a subtle blend of satire, irony and self reference. At one point in the narrative Gil says it is impossible to replicate the romance and beauty of Paris, the great irony here however is that Allen does exactly that.